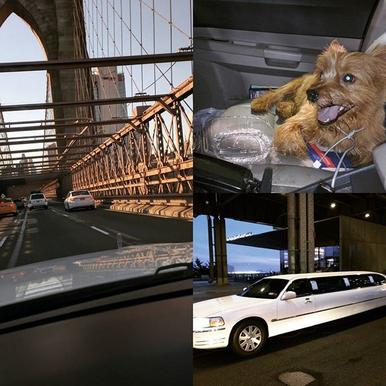 Note: As an animal lover I am very happy to have helped and that the dog had a chip so that he could be reunited with his family quickly.

Limo Driver Stops on Brooklyn Bridge to Save Lost Dog

My name is Garrick Quinones and I was driving on the Brooklyn Bridge this last afternoon when I saw car had stopped and a little red haired dog limped under it. I pulled over with my Limousine and ran over to help. The dog was nervous and didn't want to move from under the car so I went back to my Limousine to find something I could use as a leash, thank god I quickly found my phone cord and went back under the car to get him. After a few tries he let me put a cord on him, and I slowly led him out. This is while cars were rushing and honking by me.

When I got off the bridge I went searching for the nearest police officer, but I could see the dog was very thirsty and got a large bottle of water. After I called 911 operator 4 times, to asking if anyone had reported a lost dog on the Brooklyn Bridge. They said no one had, so I decided to bring him over to the 19 police precinct and was told they will scan the dog for any chips because it didn't have collar. I wanted to stay with him but, the police officer assured me that they will give him water and take care of him.

By the way, my newest little dog friend looked up at me and started to follow me and didn't want me to leave after I brought him over to the precinct.

Update: A few hours later the police officer call to say that the dog had a chip and they had contacted the owner.